The S-1 was a "switcher" (shunter) diesel locomotive built by the American Locomotive Company between 1940 and 1950. A total of five hundred and forty three were built mostly for use in the US but a small number were also sold abroad, five were exported to the Steel Company of Wales' Port Talbot and Margam Smelter in 1949-50 (as 801 to 805).


They were the first Bo-Bo diesel electrics to arrive in Britain after the Second World War and the first American built locomotives in Europe. They survived in service at Port Talbot until the mid-1980s, one reason for their withdrawal was that they required a two man crew compared to other shunters. Three were preserved, two of which are at the Nene Valley Railway and the adjoining Railworld attraction.

The Class 88 is the latest locomotive type to arrive on British mainline rails and the first electro-diesel since the Class 73 and 74 in the 1960s (though fashionably referred to these days as bi-mode), it is also the first AC electric-diesel. The Class 88 is a development of the pure diesel Class 68 and looks very similar having the same bodyshell, cab and bogies - a major difference of course being the pantograph on top!


The Class 88 is a true electro-diesel which uses the same traction equipment and control software in both modes though the diesel engine (a Caterpillar C27) only provides twenty percent as much power compared to electric mode. Ten Class 88s have been bought by Direct Rail Services with deliveries starting in early 2017 and an introduction into service in the following Summer.

A tri-mode version of the locomotive (with battery power also) known as the Class 93 is under development.

Email ThisBlogThis!Share to TwitterShare to FacebookShare to Pinterest
+ Electro-Diesel, In Service, Stadler Rail

Leeds City Transport built hundreds of tram cars of their own design over the years, between 1908 and 1928 one hundred and forty trams were built which unofficially were known as the Hamilton Class after the General Manager of the time Baillie Hamilton. The trams varied in configuration over the period though Dick Kerr electrical equipment was mostly used throughout.


The preserved car 345 belongs to a later batch of Hamilton cars which had a longer body. The tram is a prime example of how cars could be upgraded and modified during their careers. As built in 1921 it had open platforms and was rather old fashioned even as built.

In 1939 it was rebuilt with enclosed platforms, a bow collector instead of a trolly pole and the original DK 9A motors replaced by Dick Kerr 30B1s. Cars modified in this way became known as Convert Cars. Tram 345 was withdrawn from service in 1949 but retained for use at Swinegate Depot. It was preserved in 1959 and is now at Crich Tramway Museum.

These industrial narrow gauge shunters were the last locomotives built at the Hunslet Engine Company's Jack Lane Works. The works in Leeds had, since 1864, built thousands of steam and later diesel shunters mostly for industrial use. These final locomotives were built for the tunnelling of the Jubilee Line Extension project in East London. The Jack Lane Works closed in 1995.


They were 4 wheel diesel hydraulic narrow gauge shunters to 610mm gauge. A couple have been preserved. 9347, named Peter Wood, is preserved at the Leighton Buzzard Light Railway as one of the line's diesel "thunderbirds" ready to take over if one of the steam locomotives has a problem, as well as perform other duties on the line. 9351 is preserved at the Statfold Barn Railway in original condition.


The Brush Railcoaches were retrofitted with English Electric electric equipment reused from the EE Railcoaches as they were scrapped in the 1960s. Later modifications included replacing the original trolley pole with a pantograph and improved lighting - interior and exterior.

Most of the fleet were withdrawn in the early 2010s. Fourteen still survive, some in working order. One (636) is also being used to develop and test a wheel mounted motor and battery operation.

British Rail finally got the go-ahead and funds for the electrification of the East Coast Main Line (originally it was supposed to have taken place at the same time as the WCML) in the 1980s. For the ECML British Rail needed a new fleet of express passenger locomotive these were the Class 91 which were coupled to Mark 4 coaches in push-pull formation with a Driving Van Trailer on the other end [1].

This system was also called the Intercity 225 (replacing the Intercity 125 as it did on the ECML) the name referring to the fact they could go 225kp/h (140mp/h). However this has been restricted to 125mp/h in everyday use, on a test train one Class 91 reached 162mp/h in 1989 (the British locomotive speed record).


Unusually the Class 91 has an asymmetric design with a streamlined cab at one end and a blunt ended one at the other. The Class 91 can operate fully in either direction though of course usually travels pointy-end first, especially when hauling an express. However the Class 91 can travel at up to 110mp/h blunt end first. As built the Class 91s were 91/0s but became 91/1s after refurbishment [2].

They remain on express duties on the ECML though are being replaced by the Class 800. They are currently operated by LNER, before that Virgin East Coast, East Coast, NX East Coast, GNER and BR Intercity. What happens to them next is currently unknown.

The "All Red Route" was a special electric railway set up at Crystal Palace for the 1911 Festival of Empire [1] which celebrated the coronation of King George V. The railway followed a continuous loop (see the map below) with stations at regular intervals for marquees dedicated to various components of the British Empire such as New Zealand and India. The train ran slowly (up to six and a half kilometres per hour) so the passengers, who sat on cross-benches in a "toast rack" style body like seaside trams, could take in the scenery [2]!


The line was to 1,067mm gauge and was very much based on tram technology by the contractors Dick, Kerr & Company. The cars used a Brill 21E truck and could carry up to thirty-five passengers.  The conductor rail and insultators were based on current London Underground practice. One of the motor cars later was used on the Dublin & Lucan Electric Railway [3]. 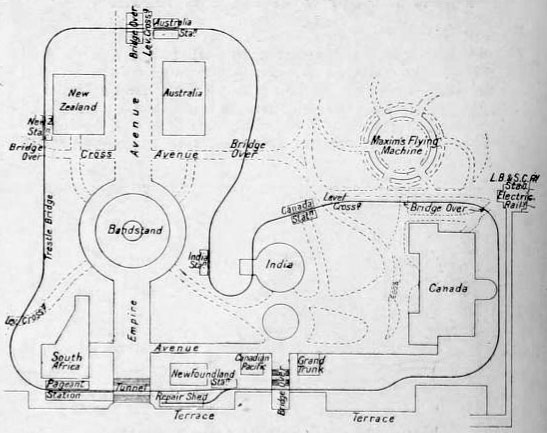 The Class 166 "Networker Turbo Express" was built alongside its DMU sister class the Class 165 but for longer distance routes between London Paddington, Oxford and Newbury. The Class 166 is very similar to the 165 but has a more luxurious interior including first class seating, two toilets, carpeted flooring and air conditioning as well as more luggage space [1]. They are capable of one hundred and forty five kp/h unlike some 165s which are limited to one hundred and twenty kp/h.

Originally both driving cars had first class accommodation but in 2014 one DMCL was declassified in order to increase the overall capacity [2].

Email ThisBlogThis!Share to TwitterShare to FacebookShare to Pinterest
+ BREL York, DMU, In Service

RAF Chilmark was a former limestone quarry near Salisbury, Wiltshire used for the storage of RAF equipment and weapons from 1937 to 1995. The base was connected to the railway network and had an extensive 610mm narrow gauge network stretching over fourteen kilometres [1]. The base had a number of locomotives operating on it over the years including some battery electric Baguley-Drewry shunters, some of the earliest were Ruston & Hornsby diesel-mechanical shunters built in 1939-1940.


These locomotives were powerful enough to pull two hundred tons on the level and thirty-six tons up a one in thirty slope. Three survived in service until the closure of the base, one being used to haul the fire-fighting train until the 1970s when it was replaced by more modern fire-fighting equipment. At least two have been preserved, RH28 seen below is at Stonehenge Works on the Leighton Buzzard Light Railway.